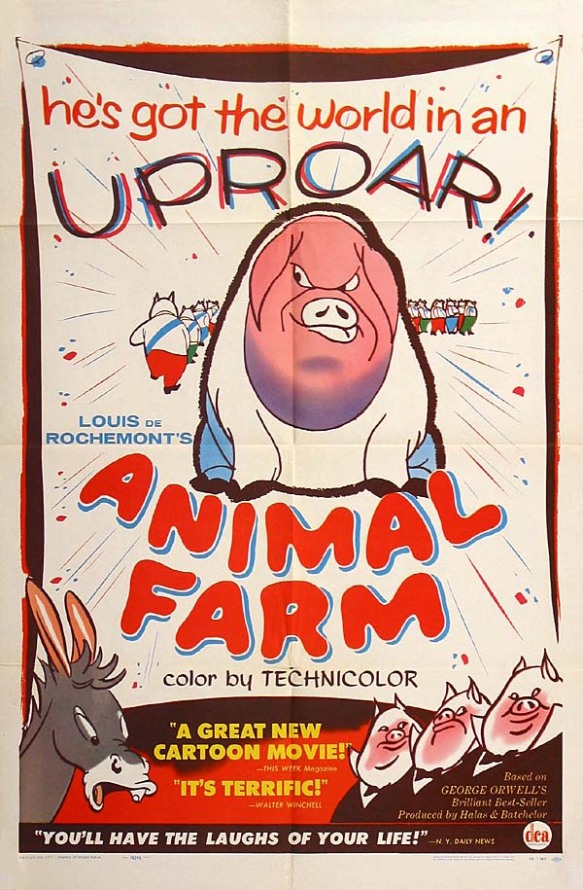 Based on the novel by George Orwell, Animal Farm, is a not so thinly veiled allegory for Russia’s Communist Revolution.  The major players in history (Stalin, Trotsky, Czar Nicholas II, etc.), are each represented by a different character here.  The difference is that each of the main characters is an animal.  A farm animal in fact.  The animals, mistreated by the drunkard, self-absorbed farmer, rebel and drive the humans out re-naming the farm Animal Farm.  The animals set up a series of rules, or commandments that must never be broken, but to the leadership and power structure, these soon become obstacles that inevitably are trampled.

If you’ve had even a brief introduction to the history of the last 50 or so years, you probably have a decent idea where this is all going.  The problem for the movie, in my humble opinion, comes with the fact that the movie is animated.  It removes some of the credibility and some of the impact of the characters and their motivations.  In place of a fiery, tyrant with dictatorial ambitions, we get a smirking, cartoon villain with no more dimensionality than the description implies.  Each character seemed a little over-simplified, a feeling that is enhanced by the animation, and the abbreviated nature of the film as opposed to say…the book.

I suppose that I’ve railed on the style of the film a bit more than it deserves.  One very obvious benefit, was the fact that the film was able to be made because of it.  In 1954, there was no computer generated anything, no animatronic puppetry, and no realistic, cost-effective way of using real animals.  The only alternative left was to use hand drawn, painted, cell animation.  This style of animation, while perhaps not conducive to the story that is being told, has it’s own artistry and beauty.  The animated movies of today are all 3D, computer-generated, and all very similar to one another.  And while a lot of these films are fine films in their own rights, ground-breaking, creative, and well told, we’ve lost something with the passing of the age of 2D animated movies.  If only for that reason, I can forgive Animal Farm it’s short comings.

Through my research, after watching the film, I found that there was a newer straight-to-video version of Orwell’s classic, one made with CG enhanced, live action animals.  I haven’t seen it, but I have to admit, I’m a bit skeptical.  The more I think about it, the more I believe that Animal Farm (the 1954 version), is a sort of document of history.  The IQ of animated films of today rarely reaches the heights of something like Animal Farm, so the very fact that something like it got made at all, at any point, is a good thing.