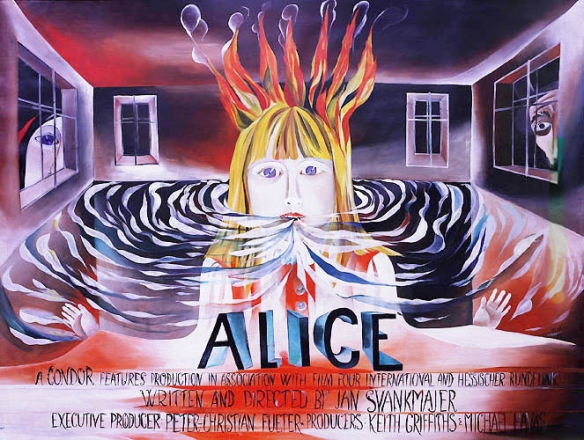 The story of Alice and her journey through wonderland is a dark and surreal one.  Animals talk, nothing is as it should be, and anger and fear are the emotions of choice.  As a kid, I was fascinated by the illustrations from the book.  They provided a very accurate portrayal of the sense of unease that I got from the story.  There was a danger mixed with the serene and a malice blended into the everyday.  This is a feeling that is perfectly recreated by the film Alice, stop-motion animated creatures made up of bones, rusty utensils, taxidermy and all.

It was just this last weekend that I ventured out to see the most recent re-make of the Alice in Wonderland, the one by Tim Burton, and I thought it appropriate that I should review this little known version.  While the newer film is the victim of re-writes, and computer-generated everything, this version, directed by cult animator Jan Svankmajer, stays faithful to the original text and feels like a flea market come to life.  The only live action actor (actress in this case) is Kristyna Kohoutova, as the curious and plucky Alice.  Every other inhabitant of Wonderland is created through the stop-motion animation technique, and is a patch work of animal bones, stuffed and mounted animals of every variety, and old, weathered household items stalking around with a sense of malicious purpose.

It’s odd that someone like Burton, who was so clearly inspired by, and borrowed from films like Alice, strayed so far from this successful cocktail in his own re-telling.  The fact that we can see the strings and the seams of each creation, manages to make it that much more dangerous and foreign to us.  There is danger around every corner for this young girl, yet she bravely plods onward without so much as a second thought.  The closest thing to a guide she has is the mangy looking white rabbit, who is continually leaking sawdust.   The Queen of Hearts, her court and her soldiers, are literally made up of a deck of cards, and when she shrinks, Alice turns from a live actress into a disturbing little china doll.  Wonderland itself is made up of a series of rooms, each more intriguing and bizarre than the last.

The one failing I would place on Alice, is the fact that while each of its characters is creepy, there is little to differentiate between them.  The March Hare and the Mad Hatter are just as off-putting and strange as the White Rabbit and the Queen of Hearts, making the disturbing effect of watching them wear off a little too soon.  By the end it was a little too repetitive, and as a result I was drawn out of the movie.

As far as adaptations of this story goes, Alice is far better than the most recent version, but still remains third behind the imagination of the Disney animated version, and the beyond surreal TV version with Sammy Davis Jr. and, God help us, Carol Channing scaring the shit out of me by turning into a goat!  All in all, Alice is a very fun watch.