What is more awful, the imitation of the famous character, or the famous character, himself?  It’s not as easy a question as I was guessing that it would be.  With such well-defined mannerisms, speech patterns that inspire imitation, and the constant repetition that drives it into the brain of the collective public, a film like this one can easily become parody.  Before seeing this film, my only knowledge of it was of the imitation of Ray Babbit that just about everyone seems to know, regardless of having seen the film or not.  I had grown rather sick of these imitations and had developed the opinion that I didn’t like Rain Man because of it.  I felt that Dustin Hoffman’s performance as the aforementioned Babbit was hammy and over the top, and I wrote off Tom Cruise as having played himself…again.  All before having seen one frame of film.  I was wrong.

For something that could have easily delved into the realm of the predictable, layered with melodrama, and schlock that I feared so much, Rain Man keeps a remarkably level-headed assessment of Hoffman’s mentally challenged Ray and his hot-headed brother, Charlie played in a remarkably subtle way by Cruise.  Immediately my impression of the film shot up as the characters turned out to be not only grounded in reality, but more importantly, utterly believable and even likable as well.

Driven mostly by his anger, and to a lesser degree by his fear, Charlie Babbitt,tries to fill the hole inside himself with things and with money.  Constantly he is reminding himself of what the world owes him, and it is with this attitude that he greets the news of his estranged fathers death.  Not willing to deal with how this makes him feel, or his own sense of loss, Charlie looks simply at what was left to him, and feels he is owed more.  He is not a terrible or a bad person, he is just so filled with anger, it’s all he can feel anymore.

The majority of his father’s money, it turns out, has been left to a brother, that Charlie never knew he had.  Ray Babbitt, the new-found brother, immediately becomes a target for Charlie’s anger, despite the fact that he’s unable to understand, let alone deal with either the anger or the blame.  Charlie is left with the choice of leaving with nothing, or leaving with Ray, hoping to get a sort of paltry ransom from the executor of his father’s estate, and the rest of the film deals with the two brothers learning to find value in one another.

While the union isn’t ideal for either of them at first, the two brothers eventually get to know each other, and in time come to trust each other too. As I mentioned before, Tom Cruise, wasn’t yet the Tom Cruise we know today.  The 1988 version could actually play more than one character, each one with subtlety and definition, too.  Watching Babbitt stretch and grow, first straining against then breaking through the confines of his anger, was one of the most rewarding experiences thus far in this endeavor.  Combined with the muted performance that Dustin Hoffman turns in, Rain Man showed itself to be the real deal.

While not my favorite of what I’ve seen during this little endeavor, Rain Man was surprisingly good.  What could easily have fallen back into the gimmick of method acting or even a plain, stale buddy movie, really blossomed into a whole greater than the sum of its parts.  Well worth it. 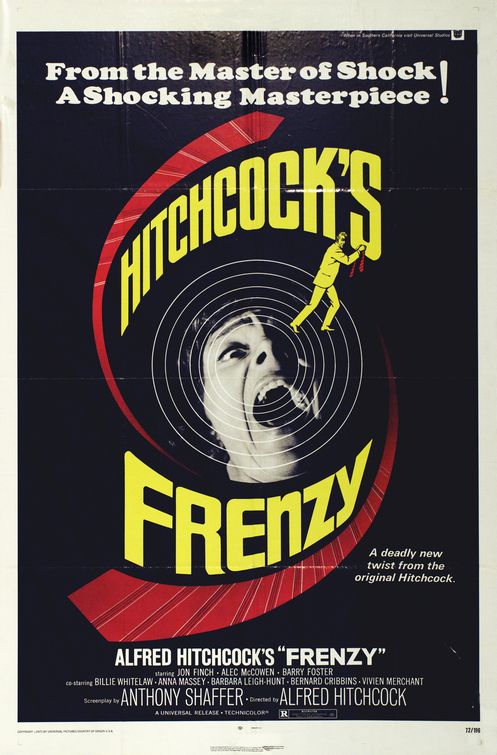 Most of Hitchcock’s work has a certain smirk to it.  It gives off the impression that there is some grand farce that everyone is in on, with of course, the exception of it’s characters.  The dialogue is witty and playful, yet to the point.  And the characters, while possessing the skeleton and characteristics of a real person, usually seem like a vehicle for the glossy movie star to seem debonair (Cary Grant), righteous (Jimmy Stewart), glamorous (Grace Kelly), or diabolical (Peter Lorre).  Basically they provide movie stars an iconic memorable performance, delivered on a silver platter.  This formula is great fun to watch, and it leads to some the best movies that I’ve ever seen (Rear Window, North by Northwest, and of course Psycho), but in 1972’s Frenzy it is nowhere to be found.

I am used to the Hitchcock of the 40’s, 50’s and 60’s, in fact that is just what I was expecting.  A glamorous film, with a huge, name, star in the lead, swelling music, glossy close-ups, and those fake, staged post World War 2, American kisses, all while lightly exploring the seedy underside of passion and human nature.  What I got in Frenzy, was a grimy, living, breathing, murder story.  It had an unlikable, but realistic main character.  It had a truely reprehensible, yet utterly believable villain.  It had violence, brutality, and…gasp…nudity!  A Hitchcock film with nudity?  I never would’ve never guessed that something so contrary to the body of work that I knew and loved ever existed.

Jon Finch plays Richard Blaney, a down on his luck ex-RAF pilot recently fired from his job.  After borrowing on the good will of the people in his life, one of them turns up as a victim in a notorious spate of killings attributed to the “Neck-tie murderer”.  The police obviously finger Blaney for the killer, and start a manhunt to bring him in.  With the police on his trail he must find the real killer and clear his name.

Early on in the film we learn the real identity of the killer, and we watch helplessly as he circles in on Blaney framing him for these crimes, and leading him towards the police.  Played by Barry Foster, the killer exudes a sleaze and a charm at the same time.  He is knows what he is, and operates not in spite of it, but because of it.  We come to understand that both men are essentially the same person, only one blames himself for his misfortune, and the other blames women.  As they go from friends to foils, Finch and Foster play nicely off of each other as they spiral closer and closer to being the same person, before Blaney discovers a humanity in himself.

As I’ve said earlier, most of Hitchcock’s films, are glossy and glamorous.  Not so with Frenzy.  The color palette of films shot in the seventies, muted and yellowish, sets the visual tone for the story perfectly.  While most studio films of the 40’s and 50’s are encapsulated in their own little realities, Frenzy is given room to breathe in the real world.  Everyone from the main characters on down to the secondary and tertiary characters looks and feels like real people.  They swear, they have sex, they get angry, and they get frightened.  While the cynicism, and dark humor typical of Hitchcock remains, it is backed up by a director not hindered by censors or morality codes.   It feels like this was Hitchcock’s first real opportunity to stretch out and tell the kind of story that he’d always wanted to.

While I’ve always enjoyed Alfred Hitchcock’s films, Frenzy really opened my eyes to just how creative and compelling a filmmaker he was.  I am looking forward to checking out more of his later work.  I hope it’s all just as good as this one!