Heading into this film, before I knew anything else about it other than the photo Netflix uses, I assumed that I wouldn’t like it. A movie about nuns? Booooorrring! Of course I wouldn’t like it.  But then it began, and the Archers logo came up (the people who made The Red Shoes, and The Life and Death of Colonel Blimp), and suddenly there was this chance that this film could be something more, much more than what is immediately present on the surface. As it happens, Black Narcissus was an austere, bland, and rather unimpressive yet beautiful looking journey through the wilds of British colonial India.

The story goes thusly…A group of relatively inexperienced nuns gets sent by their leadership, to India, charged with taking up residence in an abandoned palace high in the  mountains, and bringing the light of the lord to the local heathens.  The usual set of barriers present themselves in the form of cultural misunderstandings, a native Englishman versed in the ways of the locals, and the inner strife that comes when questioning one’s own…blah, blah, blah.  It doesn’t really matter, you won’t remember it in a few minutes, as I barely remember it now.

Plain, slow and for the first half nearly monochromatic, Black Narcissus tries to reach for the subtlety and distinction of Blimp and Red Shoes but was just never able to make it happen.  Deborah Kerr, who was so very arresting and vivid in The Life and Death of Colonel Blimp, staggers through this movie as emotionally one-dimensional as a tertiary character in a Dickens novel.  She doesn’t really change from one end of the movie to the other, aside from softening slightly to the brash Mr. Dean (David Ferrar), native Brit, envoy to the local royal government, and all around one note character.

Speaking of Mr. Dean.  It seemed like no one could decide quite what his character flaw/personality was going to be beforehand.  Is he a drunk, a cynic, or is he simply down on the snooty, dismissive behavior of the nuns to the locals?  Rather than giving him a set of characteristics, and building upon them, they decided to make him inebriated at times, moody at others, indignant and rude at still others, but without the rhyme and reason that would indicate he was a flesh and blood creation rather than a ham-fisted plot device.

Where the Brits seemed unduly rude and dismissive of their hosts, the Indian characters in the story, both Generals (young and old), the orphaned girl, as well as all of the children and villagers, all seem completely engaging and willing to learn about their guests without judging or strife.  Perhaps it’s because I come from a day and age that is more aware of and accepting of different cultures and personalities, but watching a film that comes out of the 1940’s makes western race relations seem positively barbaric and out of touch.

The one stand out, in terms of performance, is Kathleen Byron as Sister Ruth, the troubled, sickly sister who seems unable to handle the rigors and harsh conditions of the high mountain palace.  It actually wasn’t so much her performance, as it was the lack of performance.  Byron channelled Jack Nicholson’s work from the Shining, (or the other way around I suppose) all maniacal smiles and dangerous eyes, staring into space and providing her character with just enough vacancy to make her dangerous.  Sister Ruth is the most tightly wound of the nuns, and when she is pushed to her breaking point, she is unable to hold up.  It’s a shame really that she really didn’t have much impact until about two-thirds of the way through the film, but once she starts going, she is the most magnetic thing on-screen.

Similarly, halfway through the film, the color scheme begins to change from the sterile white robes and light-colored walls, into the rich swathes of color indicating lust, danger, and fear.  Beige and cream coloring gives way to deep shadowy reds, blues, greens, and oranges.  It’s really at this last third of the film that it becomes worth watching.  So much so, that it makes you wish the beginning part of the film was as interestingly composed, and executed as the latter part, although it doesn’t do much to change the fact that the story is a very dated one about the maddening effects of bringing religion to the uncivilized wilds

Despite my negative impression of the film, I did notice quite a lot of influence in a director whose films I truly do admire.  Wes Anderson, seems to have taken cues from the entirety of the Archers body of work, and for The Darjeeling Limited story cues from Black Narcissus in particular.  For example, the dramatic, rich use of color used as a backdrop against which every story plays out in all of Anderson’s films.  The diorama like composition Anderson utilizes, is equal parts Powell/Pressburger and Kubrick, but to his credit, Anderson does a much better job finding cohesion in all the disparate elements.

When it all comes down to it, Black Narcissus isn’t all that good, and certainly not worthy of its place on this list.  Sorry, Archers fans, I know it’s blasphemy to speak ill of saints Powell and Pressburger, but in this instance I think it’s justified.

“Not as good as Sister Act” – Ashley 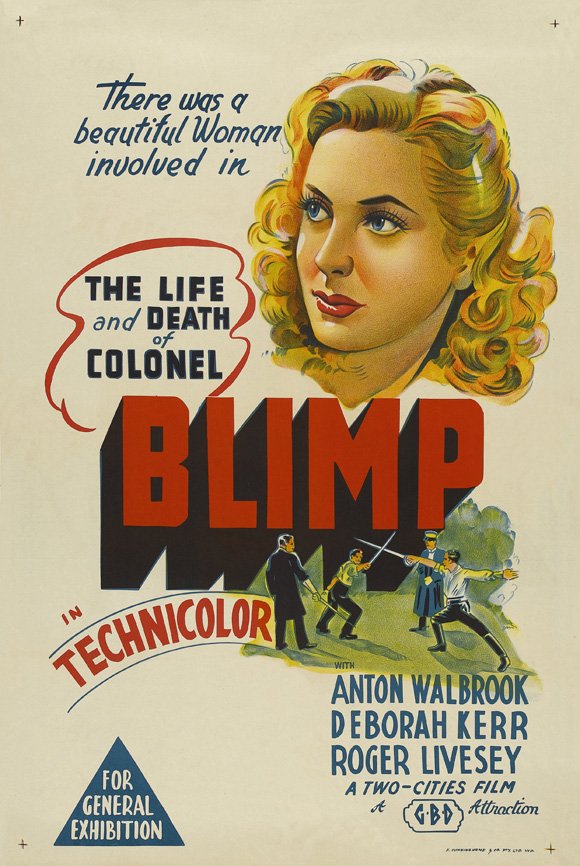 Throughout the history of cinema, pairings of filmmakers emerge who, together, can magnify and build upon each others abilities to create something that neither could have done alone. Often times these partnerships are comprised of a director and an actor, but its not limited to those two positions. For every Scorsese and DeNiro, there is a Tarantino and Lawrence Bender, or a Hitchcock and Bernard Herrman. Despite the job titles involved these partnerships can be very fruitful, but there is no more celebrated combination of talents than those of Michael Powell and Emerich Pressburger.

The Life and Death of Colonel Blimp seems to be the culmination of that particular pairing, though I can hardly profess to know for sure.  I decided to watch the movie in an attempt to follow along with the Powell/Pressburger movie marathon put on by the boys at the Filmspotting podcast.  Till that point I had, of course, heard the names of the famous duo, but I had no idea of their impact on the film industry.  So despite my having seen The Red Shoes before this film, The Life and Death of Colonel Blimp counts as my awakening to their particular brand of humor, whimsy, and romance.

Blimp  follows the unlikely friendship of Clive Candy, a young British officer, and Theo Kretschmar-Schuldorff, a German officer with whom Candy is assigned to fight a duel after a misunderstanding between their respective countries.  Each man is seriously wounded in the duel and they grow close to one another in the hospital.  Theo eventually falls in love with his friend’s companion Edith Hunter, and risks another duel to ask for her hand in marriage.

The film opens a few years from the beginning of  World War 1, and goes all the way through the Nazi build-up of the second World War.  Though they don’t see each other often, when the pair does have occasion to meet, it is clear that each man treasures his friendship with the other more than anything.  Even Candy’s fascination with Theo’s new bride, seemed to me to be simply an extension of his desire to connect with his friend more often.  Though he obviously has deep feelings for Mrs. Hunter as well.

Each man grows from the idealism of youth, to the comfort of middle age, and into the winter years of their lives all the while enduring wars, the deaths of loved ones, and the political and social challenges that go along with being on opposite sides of massive turmoil and conflict.

Roger Livesey plays the stout, indomitable Clive Candy, in all his bombastic glory.  Ever the positive go getter, Livesey imbues Candy with a certain innocence that runs contrary to all the conflict and horror the character has seen in his lifetime.  Theo, played by Anton Walbrook, is a bit more of a stuffed shirt, and in his earlier years a bit more pessimistic thanks to Germany’s loss of the first World War.  Ultimately he provides a fine counterpoint to Candy, however, as both men vie for the attention and affection of the different incarnations of Mrs. Hunter, played memorably by Deborah Kerr.  Kerr plays Hunter, but also plays the woman who Candy ultimately marries, Barbara Wynne, and eventually the driver hired by Candy, Johnny Cannon.  The fact that each of these three characters looks similar is simply for the benefit of Candy and Theo.  Beyond the exterior, these three women are different characters in their own rights.

Pressburger’s script is able to maintain the dry, sometimes zany, British humor without losing any of the real emotional heft, and Powell’s direction gives the actors room to make these characters their own.  In the hands of another writer/director team, that fine line of humor and heart could easily have been lost.

Cinematographically speaking, Blimp is positively glowing in rich Technicolor tones, and dreamy 1940’s set pieces.  George Perinal, the film’s cinematographer, was also responsible for the look of another of my favorite films from this list so far, Le Million.  Perinal manages to keep that certain dreamy quality that I loved so much from Le Million, and use it in a completely different way in Blimp.

The one rather confusing, although ultimately unimportant, problem I had with this movie, was the fact that I waited quite a while for the character Colonel Blimp to show himself.  Well, actually that’s not entirely true.  Once I was caught up in the story, I stopped caring about the title so much, but it still doesn’t make a whole lot of sense until I looked up the reference to the stodgy British militarism on Wikipedia afterwards.  Check that out here if you are so inclined.  That one quibble shouldn’t prevent you from seeing this film, it didn’t stop me!