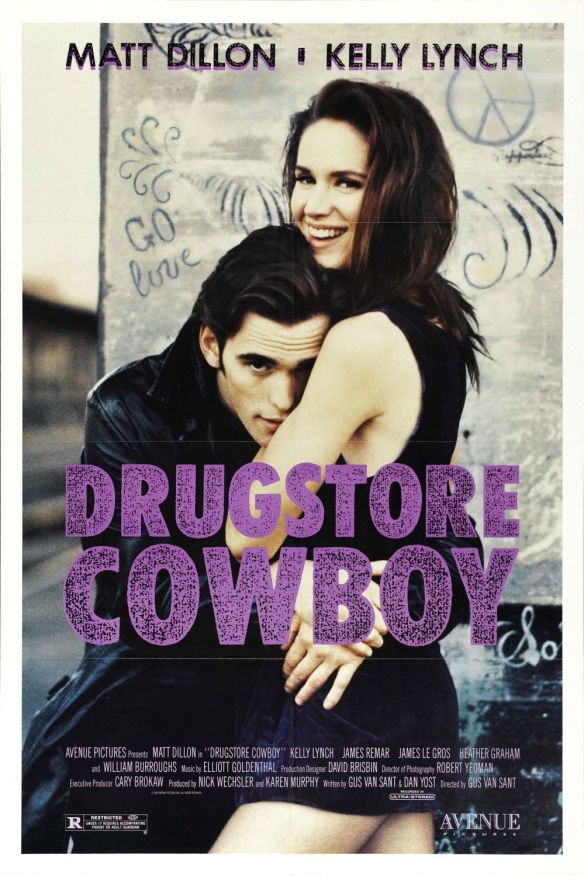 There are a few basic steps that each and every narrative film must go through to ensure that the audience can relate to, continue to watch and enjoy the film in question.  Step one: Develop compelling characters.  We as the audience need a trustworthy, reliable vehicle through which we can experience the story.  Step 2: Craft an interesting tale.  Fashion a story that has a message about something the audience either already knows something about, or would be interested to learn about.  And step 3: Tie the whole thing together and make it fun (or in the absence of fun, make it important).

In the case of Drugstore Cowboy, Gus Van Sant cherry picks from the list of steps, taking elements that he likes and leaving the rest.  While it does have characters, they aren’t very compelling.  In fact they are all rather shallow and unlikable, each a little smarmier than the last.  As far as story goes, it is of the long, agonizing, downward spiral variety.  Not super compelling, really, just a little boring to watch.  As for the last step, that was actually sort of a success.  These, selfish, venal characters were married very well with the uncomfortable depressing story, unfortunately the fun and importance WAS left out.

To bring everyone up to speed, here is a brief breakdown of the story.  Bob, Diane, Rick and Nadine are a group of junkies and opportunists out to commit small-scale robbery of drugstores (hence the name) in order to steal the controlled medication from the pharmacy counter.  When they aren’t faking seizures and or breaking and entering all in the name of getting high, they’re getting wasted, antagonizing the cops and belittling each other and their drug addled stoner neighbor (which ends up being important later on in the story).  After one of them accidentally overdoses, the three remaining addicts hole up in a haze of pot, heroin and dilaudid, and try to figure out how to ditch the body and avoid the police.

Like some of his other films (Elephant, Gerry, and To Die For spring to mind), Gus Van Sant seems to gravitate towards subject matter without a light at the end of the tunnel.  But where Elephant was an examination of the country’s reaction to the Columbine school shooting, and To Die For was an interesting, well acted, noir story at its best (I never saw Gerry), Drugstore Cowboy lacks any real redeeming quality.  Matt Dillon’s Bob spends so much of the movie as a paranoid, shitty human being, that I found it hard to give a shit about his so called “redemption” and thought it seemed rather tacked on and false.

Heather Graham as Nadine was the most sympathetic of all the characters, and only really because I felt sorry for her.  Where as the others seemed reap what they had sewn, Nadine seemed decidedly innocent and tragic.  Matt Dillon, and the rest of the major players did a fine job acting, and in truth they were probably fairly accurate to how these people would be in real life, I simply took no pleasure in watching them.

As far as direction, I far prefer the rather optimistic Gus Van Sant who surfaces every now and again to direct the occasional Oscar bait like Good Will Hunting, and Finding Forrester.  These films are far less confrontational, but they also balance the director’s inherent malaise a little better with the occasional sweetness and intelligence that we all know he’s capable of.

Now I realize I’m being a little overly harsh on this film.  It simply wasn’t my cup of tea.  In terms of its structure, and artistry, the film stands up fine, but the subject matter and the characterizations really left something to be desired for me.  I know it’s not fair to pre-judge a film, but I have a feeling that I will have an equally hard time with My Own Private Idaho which I will also have to watch as it is one of the 1001 on this list.  But I’ll do my best to give it a fair shake, and who knows…maybe I’ll be surprised.

If you’re looking for a dark movie revolving around drug addiction, and poor choices, I don’t know that you can get any better than Requiem for a Dream.  Strangely enough, the highs and lows are far deeper than those of Drugstore Cowboy, and the ending is just as (if not more) bleak and depressing.  Still the craftsmanship, architecture and immersion of Requiem left me feeling strangely satisfied, like I had really just seen something vital and important, something with a very strong warning message about the dependence and co-dependence of drug addiction, not to mention the inter-personal relationships of the people involved.