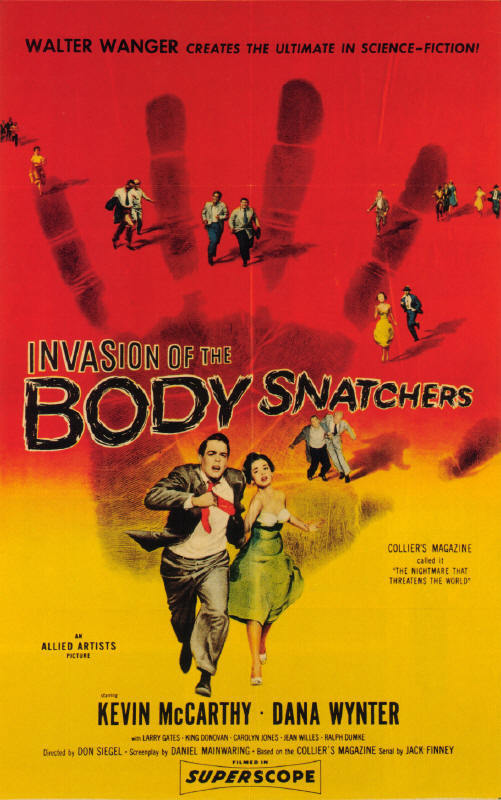 Invasion of the Body Snatchers – 1956

In the early to mid-fifties, a relatively new genre had taken hold of the film industry.  Taking the place of the grand, war-themed dramas, science fiction (often times tinged with horror elements) came into its own with the birth of the atomic age.  And while there had certainly been stories of space travel, monsters, and aliens before this timeframe, the films of the fifties and sixties came to represent the fears of the modern world.  Fear of radiation, fear of communism, and the fear of the perceived corruption of the “American” value system (these fears would stem from events as diverse as the Korean War, race relations in the United States, the burgeoning civil rights movement, and eventually the assassination of JFK).  So the question is, does Invasion of the Body Snatchers exist as a commentary on this change, or is it simply an exploitation film, capitalizing on this social upheaval to make a buck?  The answer is…both.

The story is relatively simple, a doctor in a small California town returns home from a medical seminar at the insistance of his secretary.  The doctor’s office is flooded with cases of hysterical people claiming that close friends or members of their families are in some way different, and not themselves.  When pressed for details on what is different, the only elaboration is that despite looking and acting exactly the same as usual, these people are different, and somehow off.

Eventually the doctor, teaming up with his former sweetheart, learns that the town’s people are steadily and silently being replaced by these malicious, un-feeling, pod-people, called this because of the giant seed pod that the replacement’s are born out of (a device that works especially well in the United States thanks to our dependance on and prevalence of agriculture in this country).  From then on out, it is a fight to escape the clutches of this foreign, yet eerily familiar menace.

Now, as far as I’ve read, the film was never trying to be anything more than a riveting, good time.  It may have borrowed on the xenophobia and tension that came from the communist threat, but it was never meant to be a direct allegory.  Never-the-less, the film, intentionally or not, has managed to distill the anxiety of it’s time to great effect.  Tension in the story is built slowly over the course of the story.  It never goes for the easy scare, relying instead upon the unease of the situation.  In fact, once the pods and the blank, faceless, replacements are finally shown it is almost a relief; Once we know what to look out for we can stop concentrating on everything else that we don’t have to.

In terms of the look of the pod-people, in their unformed state they aren’t so much shocking as they are unsettling.  The un-defined shape of these intruders fits nicely with the un-ease that the town’s folk are feeling.  When we’re confronted with what seems wrong with it, we can’t put our finger on it, and therein lies the success of this film.

As far as acting goes, each actor does what is necessary but no more than that.  Don Siegel, director of such other classics as Dirty Harry, The Killers, and Escape from Alcatraz, knows just what to get from his actors to keep the momentum going, and the tension thick.

I know that there are now two different re-makes of this same story, one in 1978 with the same name starring Donald Sutherland and Leonard Nimoy, and another in 2007 with Nicole Kidman called simply The Invasion.  I’ve heard from a trustworthy source that the 1978 version is pretty great, and I’ve heard from a number of sources that the 2007 version is anything but.  All in all, I was surprised with the quality in this film, pleasantly so.  I’m not sure why, but it was better than I thought it was going to be.  Definitely worth the watch.