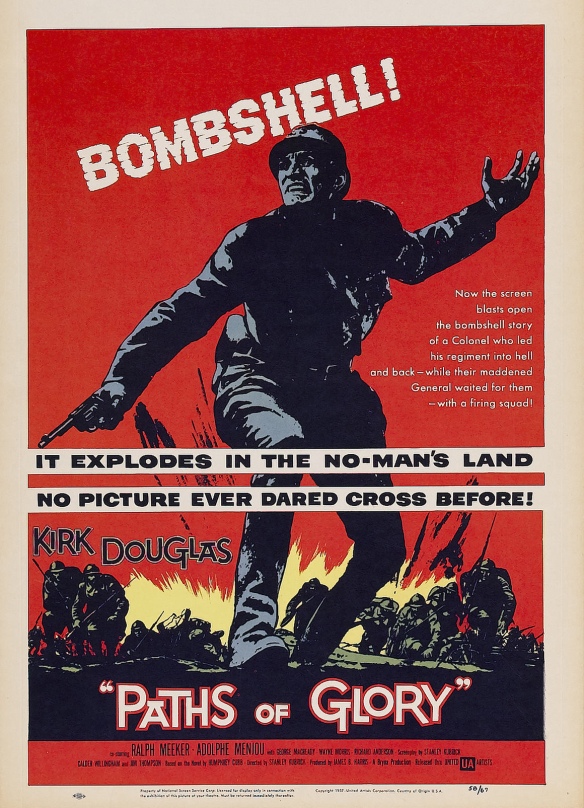 In the history of film, there are numerous examples of films showing the futility of war, the cost in human lives, and the brutality of man against himself.  Lots of films are well-known for their stance on the issues of war, a film like Apocalypse Now, puts the surrealism and carnage of war on display while Dr. Strangelove choses to highlight the ridiculous nature instead.  Other films such as Schindler’s List and The Pianist choose to show the lasting and horrible effects of war, but most all of these films labelled as important choose to stand as anti-war examples, attempting to illustrate (many of them do it quite well, too) just how pointless a lot of these conflicts actually are.

While looking back on the contributions to this list, Stanley Kubrick stands out with three prominently placed films on this list.  The first two, Dr. Strangelove, and Full Metal Jacket are no-brainers, but the third is a much lesser known film directed before Kubrick had really solidified his style.  Paths of Glory, while closer to Spartacus in style is full of substance and themes that Kubrick would touch on for the remainder of his career.

Kirk Douglas plays the beleaguered Col. Dax, a French officer stationed at the front line during World War I.  His men, already worn thin from months of fruitless fighting, have been ordered to take the “beehive”, a useless piece of land controlled by the Germans that has already switched hands numerous times preceeding this attack.  The order to carry these attacks out, given by General Mireau, is given in the hopes of earning him a promotion should the operation be a success.  The problem comes in when, after the French battalion is easily wiped out by the German forces holding the “beehive”, General Mireau grows angry with the losing effort and decides to motivate his own troops by firing upon them himself.  Once the action has subsided, Mireau, still furious over the loss, makes an example of three men by trying them for treason.  Col. Dax is the lone voice of reason, and as such, steps in to act in the defence of the men at the trial.

Kubrick’s contempt for the policies and cowardice of war makers, and war itself is made obvious in this film.  The bleakness of the battlefield, is echoed in the outlook of the soldiers on trial.  This grim worldview is a common theme, if not an outright through line of Kubrick’s subsequent body of work.  The more reasonable Col. Dax tries to be, the more absurd the situation becomes.  Reasoning seems to be thrown to the wind in favor of the keeping up of appearances and out of pure spite.  Kubrick seems to be saying that wars are run, not fought mind you, by bureaucrats and those seeking gains be they money or prestige.

The imagery in this film reaches it’s peak in the battle scenes taking place in the trenches and in the deserted and alien no-man’s land in-between the opposing armies.  Filled with twisted, distorted shapes, themselves distorted and twisted by light and shadow, these scenes have a the structure and appearance of a nightmare.  Despite the fractured appearance, the goals of the soldiers remain fairly upfront and straight forward.  Kill or be killed, live or die.  The relative normalcy in the appearance of the courtroom scenes flip-flops this.  Absurdity in normal, everyday locations is not only accepted, but encouraged.

While it maybe isn’t as indelible as some of Kubricks later films, Paths of Glory surprised me by being generally better and deeper than I thought it would be.  Early on, the film seemed only to promise mediocre action scenes, but as the plot progresses our characters are led slowly and inevitably through a series of visually stunning and tension filled settings to their doom.  If you liked the bleak and disenfranchised nature of this film, they can also be found in the works of director Jean-Pierre Melville.  Le Samouri, Bob le Flambeur, and my personal favorite Le Cercle Rouge.  Check all of them out, you won’t be sorry you did!

P.S. – Paths of Glory receives the award for having one of the coolest posters ever!  You have to admit it’s pretty eyecatching.